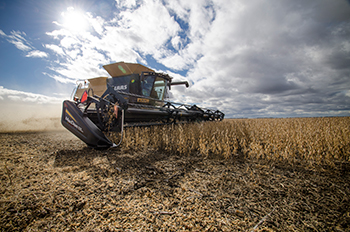 On Track for a Centennial

The lettering on the century-old barn, “Olson Stock Farm, Est. 1919”, represents the family farm that was established almost 100 years ago by Rodger Olson’s grandfather and uncle. But one would be hard pressed to find any livestock on the farm today. Instead, Olson Farms, located near Leonard, North Dakota, is devoted entirely to corn, soybeans and sunflowers.

“My grandfather and great uncle basically started with no money in their pocket,” says third-generation farmer Rodger Olson. “At that time, it was primarily a dairy and livestock operation. However, that began to change after my father passed away in 1990. My brother and I were still farming together at the time and we decided we wanted to just concentrate on crop production. So we began selling off the livestock over the next three years.”

Things have changed even more since then, however. As both families grew and their sons took an interest in farming, Rodger and his brother divided the operation and began their own family legacies. Today, Rodger continues to farm with his sons, Kyle and Bryce, who represent the fourth generation of Olson Farms. Ironically, a third son, Aaron Olson, is employed as a salesman for Butler Machinery, which, itself, is a third-generation family business.

“My brother and I still help each other out when we need to,” Olson says. “And we both plan on being around to celebrate the century mark with our families.”

Still, it hasn’t always been easy. When Rodger describes the area as being the “beach of the Red River Valley”, he’s not describing an oceanfront paradise. “Most of the farm consists of sandy soil that is poorly drained, which means it can be pretty wet at times,” he relates, noting that this past year marked his 41st crop. “In fact, just last spring, it was really wet and we were faced with a delayed planting window. As a result, we only got about 60 percent of the crop in.”

It could have been even worse, he believes, had he not switched to Challenger tracked tractors 12 years ago when he purchased a Challenger MT765. “We had been with another brand for years,” he admits. “So when we began looking at tracked tractors, we had to make the choice of staying with the same brand or looking at Challenger. To make it even more confusing, Challenger had just transitioned from Caterpillar to AGCO, which was still a bit of an unknown.

“It was the salesman at Butler Machinery who really made the deal, though,” he continues. “He did an exceptional job of explaining the features and benefits of the Challenger tractor and why it would better fit our needs.”

Today, the family runs three Challenger tractors — a MT765D, an MT855 and an MT875B. The benefits, they insist, include less compaction and the ability to work the fields in wetter conditions and get the crops in and out in a timely fashion. While the larger units are generally used for tillage, Rodger says the MT765D is used most often to pull the planter in the spring, the grain cart in the fall and for sidedressing fertilizer in emerging corn.

“All three Challengers have been exceptional machines,” he adds. “They handle the equipment very efficiently and they have excellent horsepower and traction. In fact, between the first MT765 we bought in 2002 and the MT765D we have today, the horsepower has not only increased, but we’re seeing even better fuel economy and a much quieter cab.”

The Olsons were so impressed with the Challenger tractors and Butler Machinery that their next step was to purchase two Claas Lexion 750TT
combines on tracks.

“The combines were an even bigger leap-of-faith,” says Kyle Olson. “Again, our Butler salesman did an exceptional job of explaining the advantages of the machine over its competitors, including the ability to better adjust to changing conditions and the fact that the tracks are designed to be part of the machine, not just added on.”

“The Lexion might have been a little more money on the front end,” Rodger adds. “But you gain it back pretty fast in higher grain quality and fewer discounts at the elevator. With our ‘green’ combine, we were used to seeing a certain amount of cracked kernels and foreign material, which would result in a discounted grain ticket. When we got the Lexion, we didn’t see any of that. We also got the full price for our corn without any dockage.”

The even bigger selling point, however, has been the service the family receives from Butler Machinery. “Any company that offers any kind of service should look at Butler as an example,” Kyle remarks. “When we need service,Butler has been awesome. It doesn’t matter whether you buy new, used or even a used competitive model from them,” he adds, noting that the family also owns a Cat® 320 excavator and a Horsch Joker PT400 tillage machine from Butler. “You’re always treated the same way.”

In fact, Rodger can still remember the time he called Butler about a problem with their RoGator® 1100 sprayer. It was on a Friday evening, when he wouldn’t have expected a quick response.

“Instead, they had somebody out here about 11:00 P.M. that night,” he recalls. “And when they start something, they stick with it until it’s fixed. Thanks to their efforts, we were up and going the next morning, which turned out to be a lifesaver. It rained that afternoon. So had Butler not been out here in the middle of the night, we would have had one field that didn’t get sprayed.”

Kyle adds his own recollection of when a Butler technician spent nearly two days riding in the combine with him after they purchased the Lexion combine. “It was an entirely different machine than we were used to,” he says. “So Butler had somebody out here to help us learn the features and the adjustments and to stay with us until we were comfortable with the machine.”

“As farmers, we have enough headaches and things to worry about without having to be concerned with equipment issues,” Rodger adds. “With Butler as a partner, you can just make a phone call and leave that problem to them.”

“I look back to when I started farming and the changes in technology and horsepower between then and now has been just amazing,” he recalls. “When I started farming, we were all especially proud when we had straight rows. Now, you can do that with the push of a button on the guidance system. As we go forward my role will change, but I will always be there to operate a tractor or combine. I’ve been a farmer all my life and with the equipment we have now it would be hard to give that up.”

Butler would like to thank Olson Farms for participating in this article.